Hope everyone had a great Thanksgiving. I'm out of town this week, but I'll return next week with a new post.


Michael
Posted by Michael D. Nye at 3:32 PM No comments:

Are things slowing down during the holidays? Here's a suggestion.

Well, the holidays are approaching and things are going to slow down audition-wise. But for me that means I'll have more time to work on my own projects.

And this is what all of us creative types should be doing. How about a pre-new year's resolution that we have some new projects online by the first of the year?

As for me. I've started taping the first few shows of The Gab Fest, a short talk show I'm doing with the talented Alison Dean. They should be ready to go up on YouTube right after the first of the year.

And my business partner and I are going to tape two instructional videos for YouTube on how to use improvisational exercises to increase your brain power. And they'll contain some funny sketches that illustrate the exercises. Should be a fun shoot.

Even when things are a bit slow for the professional work, we can create and act.

As for you guys - If you love to act (and/or write, direct, produce), write up a sketch, get some friends together, and shoot it! Then send me the links to anything you've created. I'd really be interested in seeing what my readers are up to.

Email ThisBlogThis!Share to TwitterShare to FacebookShare to Pinterest
Labels: acting, actors. actresses, create, Do It Yourself

How the little things can make a difference 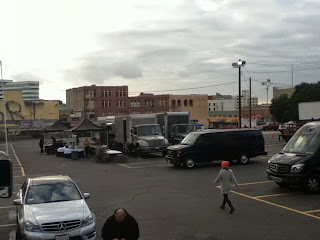 Yesterday was fun - even if I did have to get up at 4:45 a.m. for a 6:15 call time. I shot my scenes for the Showtime series, House of Lies. Got to work with Don Cheadle and Kristen Bell. Everyone, from the stars to the crew was nice to work with.

We shot on the 11th floor of the Biltmore Hotel in downtown Los Angeles.

And what did I learn? Well, the acting part was pretty straight-forward, but I did get a reminder to check myself in a mirror after scarfing down a crumb donut during a break. Yeah, I still had a crumb or two around my mouth when we got ready to shoot. The makeup person was like. "What's that on your mouth?" And that was just before my closeup, so I'm glad somebody caught it.

We sometimes forget that when we're on a break, we can mess little things up - makeup or wardrobe wise. When I washed my hands after using the restroom, I managed to get a few drops of water on my shirt cuffs. Fortunately the break was long enough that they dried before we shot again, otherwise I would have had to ask the person in charge of hair and makeup to use her blowdryer on the cuffs.

Why am I talking about this kind of stuff, instead of the more "important" acting stuff? Well, because your best acting stuff might not get on the screen if the editor sees something like water spots or crumbs when they are editing the film. For example, with the crumbs on my mouth - if they had shown up in my closeup and nobody caught them until they were editing, the editor would probably drop the closeup and just stay with the long, wide shot where the crumbs didn't "read" on camera. So, because I didn't check my face, I could lose my closeup!

Bottom line is - even though most hair, makeup. and wardrobe people are good at checking us out before we shoot, ultimately, we - the actors - are responsible for making sure we are ready to shoot. Yes, knowing our lines and blocking, and motivation is very important, but when it comes to being on camera, everything is important and can make a difference in what ends up on the screen.

I booked "House of Lies" this week - the good and not so good of preparing for an audition.

Hi everyone. It's been both a fun and a crazy week since I last posted. Many auditions and a booking. I'm doing a role on "House of Lies" for Showtime next week. My scenes are with Don Cheadle, an actor I've admired since he did "Crash."

I also had auditions for two different characters on the new Cohn Brothers film, a new Marvel series, several other TV shows, and a commercial.

Should you ask questions at the audition?


In many of the auditions, I didn't get more than the sides (a page or two) and there were a bunch of questions I had about what was going on in the scenes. Do we ask the casting director all those questions when we get to the audition? Nope. If they ask if we have any questions, what they really mean is - do we have ONE question that we really need the answer to in order to do the scene. You can almost never ask all your questions, or discuss the character's motivations, etc.

So, what do we do? Well, I'll pass on what I do. I make my own choices. How do I know if they're the right choices? Honestly? I don't always know. But I make the best choices I can with the available material: who am I?, who am I talking to?, what do I want from them?, where is the scene taking place?

What if I make the wrong choice?


If it says that I'm angry, how angry am I? Sometimes our dialogue will give you a clue, and sometimes we just have to make our own choice. And usually, if it's too strong (and it's better to be too strong than too weak), the casting director will have us do it again and take it down a bit. That's what happened in my audition for House of Lies.

I was really energetic on the first take, and although the CD thought it might work, she had me do it again a little less "enthusiastically." If you take the CD's notes, and do it the way they suggest, it shows that you can make adjustments in your performance - and that's a good thing.

So, even if you're not sure that your choice is the "perfect" one, commit to it fully. You (and I) won't always be right, and we won't get some acting jobs because of it, but being weak and indecisive in our acting choices is far worse than making a strong, incorrect choice.


Okay - I'm plugging my ebook again, but it does cover a lot of stuff about auditioning and booking the job.

The Actor's Guide to Auditioning