Wishing all of you the best of the holiday season. We spend so much of our time working on our own career things - classes, photos, auditions, performing, writing, etc., so it's nice to take a little time and connect with friends and family. It can be a great way to recharge your energy for the new year as long as we don't let holiday stuff make us crazy.

Next week we'll talk about preparing for the new year and a few resolutions that may help in order to take the next steps in your career. 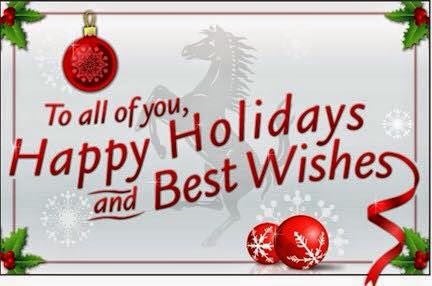 Making choices at an audition.

I had an audition this past week for a popular procedural show - one of those long-running crime/mystery shows. And the character I was reading for was a really intense character. But, it could have been played a couple of different ways. So, what did I do in the few days I had to rehearse it?

First I looked at the different choices and what clues I could get from the dialogue. For example, if another character asks your character - "Do you know Jeremy Jones?", and your response is, "I ain't got no knowledge of that person," you can assume that your character is not an educated person. Now, if the line is the same, but he adds, "… so just leave me alone." What does that add to the character? He's hostile? He's a loner? He doesn't like the person asking him the question? Maybe the person asking him is a cop and he doesn't like any cops.

The casting people don't want you to be asking them what they want - or what they see as the character - they want to see what you bring to the audition. If you're a beginner, you might get told what to do, but if you want to move up the ladder and get better roles, you will be expected to bring a fully realized character to the audition.

At my audition, not only was the casting director in the room, there was also the show's director, the producer, and the writer. And since this was for a TV show, they simply don't have the time to have a conversation with every actor about the character. This is why no one asked me if I had any questions. If they had given me an adjustment after my first read, then I could have asked a question to clarify the adjustment.

As actors, we aren't just puppets, we are expected - most of the time - to be creative and to make the choices ourselves. And believe in them and commit to them. There are some exceptions, mainly in commercial auditions, where the casters will usually tell us what they want from the character. Since I talk about that in another post and in my book, I won't go into it in this post.

The one thing you want to avoid in a film or TV audition is trying to play all the possibilities. You must make a choice and stick with it! Then if the caster wants to see a different take on the character, they will give you an adjustment. If, in the above example, you were a little too angry, they might say, try it again more frustrated than angry. And this is why you want to go through several possibilities when you are rehearsing, so that you can make a change if they give you an adjustment. You just don't want to try to play all your choices in the hope that they will see something in your audition, because all they will see is an actor who has not committed to a choice.

And how do we make those choices? We do it by supplying our own answers to to our questions. For example - is the character angry or frustrated? Try it both ways. Which way feels most right? Go with that. You may be wrong, but you'll be strong. And strong and wrong is far more interesting than weak and blah.

Do people still get "Discovered?"

Jason from Harrisburg, PA wrote in and asked this question, Do people still get "Discovered?" And if so, where?

Hey Jason - thanks for your email. Discovered is a tricky word. If you mean do people get discovered for films and TV when they are just sitting around somewhere, hanging out? Or walking down the street? Maybe one in a million.

Seriously. In the old days, even before my time, the studios had talent scouts that went to beauty contests and sporting events to find potential talent to be tested at the studio. And sometimes they even found talent at a soda fountain or by simply walking down the street.

But those days are long gone. You can figure that anybody who approaches you in a mall or somewhere and asks you if you want to be an actor / star, is probably going to try to scam you in some way - usually for money or sex.

But if you mean do people get offered representation, or parts in a film or show, if they are seen performing in something? Yeah, that happens. In fact it's pretty much the only way it does happen. You have to be doing something in order for someone to discover you. Let's take a look at what that means.

Below is a list of the types of things you can do to get "discovered." I've listed them in order of their strengths, but some of them are very close. Having a good role in a feature film (even a ultra low-budget one) that does well at festivals will probably get you some real attention. Doing extra work or short films are the least likely ways to get discovered. There are exceptions to this, but not many.

Note: I was an exception to this - I was interviewed for an extra role and the producer saw my interview and brought me in to read for a principal role, and cast me. But like I said, it's really rare for that to happen.


Doing your own thing on the internet (mainly YouTube or Funny or Die.)

Performing in a play

Singing in a club / cabaret

A last note about the list - the stuff has to be of good quality. If you're doing stand-up comedy and you suck (sorry to be blunt), you're not going to get discovered. If the film you're in is horrible (and not in a good way), it's not going to help your career.

And finally, even if your web series on YouTube is great, people have to see it, which means you also have to promote the hell out of it. Felicia Day went all over town putting up fliers for "The Guild" before it took off and helped her career.

Memorizing lines for an audition

During the holiday season things usually slow down, but I've been getting a few auditions. And the roles have had a fair amount of lines for the auditions. This made me think of a question I've seen discussed on other sites - whether you need to have all the lines memorized.

Here's how the answer breaks down in my experience:

If it's for a commercial, and you've had the copy (the lines) for a day or more before the audition, then you are expected to be letter perfect. If the copy is not available until you show up for the audition, and it's only a line or two, you will be expected to be letter perfect. If it's a lot of lines, you'll be expected to be close to perfect. I know that sounds crazy, but that's what they will expect in most cases. There is usually very time in the commercial world to learn lines, so the person who is quick with memorization has an advantage. Yes, you obviously have to be a good commercial actor, but remember, they often call in a large number of actors to audition, so there's going to be ones that are both good actors, and fast memorizers.

TV is kind of like commercials - it shoots fast, but the skills of the actor become a little more important than just memorization. As long as you don't screw up the lines too badly, your acting can make up for some mistakes. At an audition for a recurring role on a popular show, I screwed up the few lines I had both times I read and still got the part! Why? - well, maybe because I looked like the actor whose brother I was playing. Or maybe because I'm brilliant. But probably the look-alike thing.

With films, you get more time. You will usually get the sides a few days ahead of your audition, and as long as you give a strong reading as the character, the words don't have to be perfect. You'll usually have plenty of time to work on the lines before the shooting starts, and the director and producer know that.

And a play? Most plays are in rehearsal for at least 3-4 weeks (sometimes longer), so like a film, it's more about your interpretation of the character than it is about memorization.

If you email me, I'll send you - free - some tips on memorizing lines. Just put "memorizing" in the subject line. Or buy my audition book - it's got a chapter on memorizing.

Michael
Posted by Michael D. Nye at 6:15 PM No comments: